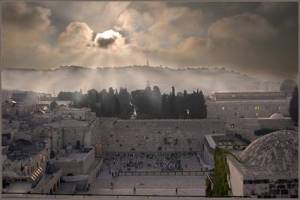 One of the most prominent themes throughout the Bible is the kingdom of God. The framework of Israel’s existence and self-understanding was formulated from God’s covenant with Israel and Israel’s servant to God the King. Israel is the people of the king, and the Holy land is the land of the king’s rule. Given the Messiah is supposed to be the ideal representative of his people, he has a kingly role as well. Let’s look at some of the messianic texts in the Old Testament that speak about the kingly role of the Messiah.

Judah, your brothers shall praise you; Your hand shall be on the neck of your enemies; Your father’s sons shall bow down to you. “Judah is a lion’s whelp; From the prey, my son, you have gone up. He couches, he lies down as a lion, And as a lion, who dares rouse him up? “The scepter shall not depart from Judah, Nor the ruler’s staff from between his feet, until Shiloh comes, and to him shall be the obedience of the peoples. (Gen 49:8-12)-NASB

1. Jacob, prophesied various details as to the fortunes and fates of the descendants of these men.

2. God is revealing to Jacob the future history of his descendants.

3. The older brothers are disqualified from the birth-right (i.e., Reuben, Simon, Levi).

4. Jacob foretold a future for the tribe of Judah that pictures him as the preeminent son – the prominent tribe.

We see the following about this passage:

1. The Messiah has already been declared to be a man, descended from Abraham (Gen. 22:18)

2. His descent is now limited to being a son of Judah

4. The rule of Judah is envisioned by Jacob as extending beyond the borders of Israel to include the entire world.

We see in the prophecy that “Scepter” is a “symbol of kingly authority” and will remain in Judah’s hand until “Shiloh comes.” In the minds of the Jewish people, “Scepter” was linked with their right to apply and enforce the law of Moses upon the people, including the right to adjudicate capital cases and administer capital punishment. The prophecy declares that Judah will finally lose his tribal independence, and promises a supremacy over at least some of the other tribes until the advent of the Messiah. See more on this here:

As seen in 2 Sam. 7:1-4, David wanted to build a “house” (or Temple) for the Lord in Jerusalem. God’s response to David was one of rejection. The desire for the restoration of the Davidic dynasty became even more fervent after the united kingdom of the Israelites split into two kingdoms, Israel and Judah, at the time of King Rehoboam.

For a child will be born to us, a son will be given to us; and the government  will rest on His shoulders; And His name will be called Wonderful, Counselor, Mighty God, Eternal Father, Prince of Peace. There will be no end to the   increase of His government or of peace, on the throne of David and over his kingdom, to establish it and to uphold it with justice and righteousness from then on and forevermore.”

This passage speaks to the everlasting rule of the Davidic King. The figure is called “Wonderful Counselor” (Pele-Yoeitz) which is used only of God and what God does. This is never used of what God does. “Mighty God”  (El-Gibbor) is never used of a mere man. We read in Isaiah 10:21 that “A remnant will return, the remnant of Jacob, to the mighty God.”  The word ‘el’ always refers to a deity.  “Everlasting Father”- “Father” is here in a pre-Trinitarian sense.  Jesus  is not literally the Father but he can play the role of a Father in that he cares, protects, etc. “Prince of Peace”- is sometimes used of men in the Hebrew text. In Isaiah, the work of peace is of God only. The significance of this passage is the phrase “there will be no end.” In observing the immediate context of this passage, one might assert that this passage is referring to Hezekiah’s reign. This assertion is problematic since Hezekiah’s reign was one that was rather limited in an international sense.

The Davidic King in the Royal Psalms

Why are the nations in an uproar And the peoples devising a vain thing? The kings of the earth take their stand And the rulers take counsel together Against the LORD and against His Anointed, saying, “Let us tear their fetters apart And cast away their cords from us!” He who sits in the heavens laughs, The Lord scoffs at them. Then He will speak to them in His anger And terrify them in His fury, saying, “But as for Me, I have installed My King Upon Zion, My holy mountain.” “I will surely tell of the decree of the LORD: He said to Me, ‘You are My Son, Today I have begotten You. ‘Ask of Me, and I will surely give the nations as Your inheritance, And the very ends of the earth as Your possession. ‘You shall break them with a rod of iron, You shall shatter them like earthenware.’” Now therefore, O kings, show discernment; Take warning, O judges of the earth. Worship the LORD with reverence And rejoice with trembling. Do homage to the Son, that He not become angry, and you perish in the way, For His wrath may soon be kindled. How blessed are all who take refuge in Him!  (NASB)

What do we see here?

1. Psalm 2 should be read as a coronation hymn, (similar to 2 Kings 11:12) and today marks the moment of the king’s crowning.

2. God tells the person to whom he is speaking that He is turning over the dominion and the authority of the entire world to Him (v 8).

4. Vs 11-12: One day God will subjugate all the nations to the rule of the Davidic throne.

Psalm 89 is another royal Psalm.

We see the following:

3. The Davidic King will be the “firstborn” and enjoy the highest rank among all earthly kings.

4. God promises to establish David’s throne and continue his dynasty from one generation to the next for perpetuity (vv.28-29).

The rule of the King as the Son of Man

I kept looking in the night visions, And behold, with the clouds of heaven One like a Son of Man was coming, And He came up to the Ancient of Days And was presented before Him.  “And to Him was given dominion, Glory and a kingdom, That all the peoples, nations and men of every language Might serve Him. His dominion is an everlasting dominion Which will not pass away; And His kingdom is one Which will not be destroyed. NOTE: SEE OUR POST ON A LOOK AT THE SON OF MAN AS A MESSIANIC PROPHECY

John Sailhamer notes that there is a thematic correlation between Gen 49:8-12 and other passages in the Old Testament. He says:

The plural word “nations” rather than singular suggests that Jacob had a view of Kingship that extended beyond the boundaries of the Israelites to include other nations as well. In any case, later biblical writers were apparently guided by texts in formulating their view of the universal reign of the future of the Davidic king. For example, “Psalm 2:8 “Ask of me, and I will make the nations your inheritance”; Daniel 7:13-14, “There was one like a son of man, he was given authority, glory and sovereign power; all peoples, nations, and men of every language worshiped him.” (see John H. Sailhamer, The Pentateuch As Narrative A Biblical-Theological Commentary (Grand Zondervan, 1995), 235.

The reign of God is one of the most pertinent themes in biblical theology. God has extended His mercy and grace to the human race by allowing us to glance at the role of the kingdom of Godin His plan for the redemption of the entire world. God took the initiate by revealing to mankind a fuller part His kingdom program through the ministry of Jesus of Nazareth. Jesus’ miraculous deeds, healings, and power over nature as well as His role as a Suffering Servant was another stage of inaugurating the kingdom of God. Jesus also fulfills the role of the inaugurator of the kingdom of God by being honored and demonstrating the authority to execute judgment. Jesus currently rules over the cosmos at the right hand of the Father (Acts 2:24-33; 5:31; 7:55-56; Eph.1:20-21; Col.3:1; Heb. 1:3; 8:1; 10:12; 12:2; 2 Peter 3:22). Jesus, being the divine Messiah exhibits the same attributes as the God of Israel. One day, Jesus will return to fulfill the promise of completing the earthly aspect of His kingdom work. May all of us as wait with eager anticipation. As the Apostle Peter said,

But the day of the Lord will come like a thief. The heavens will disappear with a roar; the elements will be destroyed by fire, and the earth and everything in it will be laid bare. Since everything will be destroyed in this way, what kind of people ought you to be? You ought to live holy and godly lives as you look forward to the day of God and speed its coming. That day will bring about the destruction of the heavens by fire, and the elements will melt in the heat (2 Peter 3:10-12).