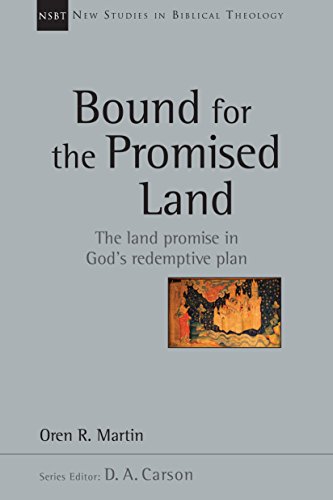 When it comes to a theology of the land and how it plays a role in the Bible, there have been very few treatments of such an important topic. Oren Martin attempts to do this with his book Bound for the Promised Land: (New Studies in Biblical Theology). As Martin says in Chapter One, “The aim of the present study is to demonstrate that the land promised to Abraham advances the place of the kingdom that was lost in Eden and serves as a type throughout Israel’s history that anticipates the even greater land – prepared for all of God’s people throughout history – that will come as a result of the person and work of Christ. In other words, the land and its blessings find their fulfillment in the new heaven and new earth won by Christ.”- Pg 17.

Martin does a wonderful job of expounding on the importance of the land theme and how it relates to the entire biblical narrative.  He discusses some of the written works that have attempted to wrestle with the issue of the land and how it relates to the narrative (Walter Brueggemann, W. D. Davies, Craig Bartholomew, Gary Burdge and others).  Martin is also correct that some treatments of the land in the Bible are shaped by conflicting views (e.g. Palestinian Christian, Jewish Christian). As I anticipated, Martin discusses typology. He says,

He says, “Typology is prospective and prophetic. That is, God intentionally planned certain persons, events and institutions in redemptive history in order that they would serve later redemptive – and Christological – realities.”- pg 26.

As Martin points out, one of the goals of Biblical theology is to wrestle with the promise- fulfillment theme of both Testaments. In other words, how do both Testaments relate to one another? The land is just one of several topics that Biblical theology much wrestle with. Martin is correct the land theme has been often neglected and this is quite sad given how much space is given to this topic in the Bible.  Martin evaluates the land theme in both the Jewish Scriptures and the New Testament. I commend him for that. In some cases, many treatments of a theological topic will start with the New Testament and then go backwards. I always have found that to be the wrong hermeneutical approach.

In Martin’s chapter on The Epistles , I anticipated that Martin would mention this text: “For the promise to Abraham and his offspring that he would be heir of the world did not come through the law but through the righteousness of faith.”-Romans 4:13. Martin says:

“The land initially promised to Abraham and his descendants extended to the borders of Canaan, both the typological pattern and trajectory of the Old Testament show that as his offspring multiplied and filled the earth, so also would the boundaries of the land encompass the earth. Of particular importance is Genesis 26:3–4, where the unique plural ‘lands’ (hā’ărāṣōt), when read in conjunction with the oath to which it alludes in Genesis 22:17–18, makes clear that Abraham’s seed will possess/inherit the gate of his enemies.14 This, together with Genesis 22:17, provides firm exegetical  warrant for Paul’s assertion that Abraham would inherit the world. Paul, then, is demonstrating sound biblical exegesis, informed by Scripture’s redemptive-historical story line, by putting all three elements of the covenant together. Therefore in the light of Christ – Abraham’s (singular) seed (Gal. 3) – Abraham and his (corporate) offspring will inherit the world as people, both Jew and Gentile, come to faith in Jesus Christ.”- pgs 134-135.

1. Israel is (the type- the particular)  in the Old Testament. The Church ( the anti-type: a people group composed of Jews and Gentiles) is the universal- the fulfillment.

2. God uses a particular man (Abraham the type) and his people (the Jews- the type) to bring blessing to their neighbors and to the world (Christianity-the universal).

3. (Christianity- the universal) replaces or fulfills Judaism (the particular). Granted, anyone that has kept up with scholarship that has focused on the Second Temple period (James Dunn, N.T. Wright, and others) have been saying the same thing. The first followers of Jesus were a sect of Judaism and they were one of several “Judaism’s” in the first century. Thus, is you were a Jew or Gentile in the first century and you came to follow Jesus, you were part of the Jewish world. Because of several historical, theological, and sociological factors, today, Christianity is totally separate religion that has very little do with Judaism. Because of this, many Christians view Judaism as about law and legalism, while Christianity is viewed as being about grace and love. But to assume there is one Judaism in the first century and then Jesus comes and now we have Christianity which fulfills Judaism is just historically inaccurate and ignores the complexities of the Second Temple period.

With these thoughts in mind, it is alleged that Romans 4:13 reveals a universalization of the Abrahamic promise. It is assumed that this indicates that the “world” has replaced or ‘fulfilled” Israel’s purpose  in the consummation of the covenant promise. I have never really understood why this text is one of the main texts theologians attempt to utilize to demonstrate that the land has been so universalized that it redefines or even replaces, or supersedes Israel. So the question is whether Abraham understood that the land promised to him as simply as a type anticipating the future reality of the coming of the messianic kingdom with the Messiah himself assuming the throne of David in heaven? So was Abraham’s ultimate goal  the attainment of a spiritual land?

I will defer to Steven M. Vantassel comment’s in the book  The Jews, Modern Israel and the New Supersessionism (New Revised and Expanded Edition), by Calvin Smith and Calvin L. Smith. He says:

“The Greek word translated world is kosmos occurs 9 times in Romans (Rom 1:8, 20; 3:6, 19; 4:13; 5:12, 13; 11:12, 13). Only 1:20 definitely refers to the physical planet. All the remaining occurrences of kosmos can be interpreted as referring to human activity and not to geography. For example, in Romans 1:8, Paul says that the faith of the Romans is proclaimed throughout the whole world. Clearly, Paul is referring to the preaching of the Gospel to people and not to physical locations. Even if one says, that Paul intended kosmos to refer to people and places, we still must ask if one is primary. Even if we concede that Paul wanted kosmos to refer to the planet, the verse still lacks sufficient force to overthrow the view that God promised ethnic Jews the land of Israel.”

Obviously, Genesis predicts that Abraham literally would be  the father of many Gentile nations. This did happen. But  the logic of Paul’s argument that Abraham and his descendant(s) would inherit the world gives no indication that the specific land promised in Genesis 13, 15, and so on will be missing from that world. Rom 4:13 is used as the one big text to show the land promise has been transcended. But we would have to look the treatment of the land in the entire Bible. Granted, Martin does cover plenty of other texts besides Rom 4:13. But this one seems to utilized to build the case for their position.

Towards the end of the book, Martin is fair in evaluating  both dispensational and covenantal views of the land promise in the Bible. I have grown tired of the debates between both of these schools of thought. Martin mentions some of strengths and weaknesses of both views. But he then mentions some of the issues of “Inaugurated Eschatology” which says the the end times were inaugurated in the life, death and resurrection of Jesus, and thus there are both “already” and “not yet” aspects to the Kingdom of God.  We are now living in the end times (or latter days), which were inaugurated at the life, death, and resurrection of Jesus. With the kingdom of God having been inaugurated by Jesus, the church has access to the kingdom promises right now. In the context of this issue, Martin says something that is a theme I see quite frequently:

“The New Testament shows that all of God’s saving promises have already been fulfilled in Christ and that these promises are expanding where Christ is present – in the church now and finally in the new heaven and new earth in the age to come. Secondly, Scripture presents the New Testament antitype to fulfill the Old Testament type, for in and through the person and work of Christ all of God’s promises have reached their telos. This point is what distinguishes the view of this book from replacement theology. In other words, it is not that the church replaces Israel and inherits her blessings. Rather, Israel finds its fulfillment not in a community but in an individual Son of God.”- Pg 170.

Martin, like others, have moved away from wanting to be having a replacement, or a “supersessionist” view of Israel and the church. So they now call it “fulfillment” theology. But this puts us back to the debate over the particular and the universal (see above). If Martin and others say the particular reaches its fulfillment in Jesus and Christianity (see above), does it really make any difference to use the word “fulfill” over terminology such as “replace” or “supersedes.”   In Gerald R. McDermott’s Israel Matters: Why Christians Must Think Differently  he discusses the terms “Replacement Theology” and “Supersessionism.” He says:

“Supersessionism holds that all the promises that God made to Old Testament Israel are now (since the resurrection of Jesus) applied to the Christian Church. The promises were contingent on obedience to the covenant. Biblical Jews broke the terms of that covenant—both before Jesus came, by breaking God’s laws, and then after Jesus came, by refusing to accept him as their messiah. But since Jesus obeyed all of God’s law, and all believers in him are joined to him, his obedience is credited to them. So by virtue of his obedience and their inclusion in him, Christians receive the blessings of the covenant. They are members of the New Israel, which is his body, the Church. This is also called “replacement theology.” The Church replaced biblical Israel as the apple of God’s eye. God’s covenant with ancient Israel was replaced by Jesus’new covenant, which is made with all those who believe in him. The Church has replaced the Jews as the inheritors of all the biblical promises concerning Israel. When Christians read the Old Testament prophecies about the restoration of the people of Israel to the land of Israel, they should interpret those prophecies as referring to the Christian Church. The true meaning, according to this view, is that the Church will inherit the whole world in the age to come. All of those in the Church will be blessed, not just Jews. There will no longer be a distinction between Jews and gentiles among those who believe in Jesus, and there will be no land of Israel separate from the rest of the world. For the Church has replaced the ethnic people of Israel. And the little land of Israel has been replaced by a whole world. The Jews are no longer God’s people in any special way, and the land of Israel is like the land of any other country in the world—say, Uganda or Thailand.” -Page 2.

My question is the following: If the particular has no role in the plan of God anymore, then the end result is the same. Is fufillment theology any different than replacement theology or supersessionism?

In the end, I appreciated Martin’s book. But I find two recent works to be more exegetically satisfying. They are  The New Christian Zionism: Fresh Perspectives on Israel and the Land and Gerald R. McDermott’s Israel Matters: Why Christians Must Think Differently about the People and the Land.