Over the years, I have attempted to educate youth, college students, and adults about the need to move from a privatized faith to a public faith. In other words, when we present the Gospel, almost all of us talk about how people can have a personal relationship with God through His Son, Jesus the Messiah. While our faith is certainly about our relationship with Jesus, unfortunately, many Christians stop there. Thus, they don’t see their faith as a worldview. Therefore, they aren’t taught that their faith should be able to answer the big questions of reality. C.S. Lewis once said ” I believe in Christianity as I believe that the sun has risen: not only because I see it, but because by it I see everything else.”

The term worldview was used in the sense described by prominent German philosopher Wilhelm Dilthey (1833-1911). Dilthey affirmed that philosophy must be defined as a comprehensiveness vision of reality that involves the social and historical reality of humankind, including religion. A worldview is thus the nature and structure of the body of convictions of a group or individual. (1) Worldview includes a sense of meaning and value and principles of action. It is much more than merely an “outlook” or an “attitude.” Each person’s worldview is based on a key category, an organizing principle, a guiding image, a clue, or an insight selected from the complexity of his or her multidimensional experience. (2)

Believe it or not, a worldview will impact our view of our vocation, our family, government, education, the environment, etc. A worldview also impacts ethical issues in our culture such as homosexuality, abortion, stem cell research etc. Remember, the issues of competing worldviews shape the past, present, and future of a nation.

Some of the fundamental questions that make up a worldview are the following:
• Origins: How did it all begin? Where did we come from?
• Fall: What went wrong? What is the source of evil and suffering?
• Redemption: What can we do about it? How can the world be set right again?
• Morality: What is the basis for morality? In other words, how do we know what is right and wrong?
• History: What is the meaning of history? Where is history going?
• Death: What happens to a person at death?
• Epistemology: Why is it possible to know anything at all?
• Ontology: What is reality? What is the nature of the external reality around us?
• Purpose: What is man’s purpose in the world? (3)

How does one decide on a worldview? Here are some guidelines:

First of all, a worldview must be consistent: Reason has to be utilized which includes systematic criteria. In using systematic criteria, an individual appraises the truth of a system or worldview.These criteria do not produce systems of thought; instead they judge them. David Wolfe has identified four ways in which one may judge a system of thought: consistency (meaning ideas do not contradict each other) and coherence (the ideas have a positive fit). These are the rational criteria. Comprehensiveness (a system of thought that incorporates the broad range of experience) and congruence (the idea fits human experience) are part of the empirical criteria.(4)

In relation to the creation account, two worldviews that make opposite truth claims are metaphysical naturalism and biblical theism. The naturalistic worldview came to be more prominent during the Enlightenment period. Philosophical or metaphysical naturalism refers to the view that nature is the “whole show.” Biblical theism does acknowledge that while God is the primary Cause of all things, He also works through secondary causes. In other words, God acts in the world through direct intervention (a miracle such as the creation of the universe) and natural causes or indirect actions (preservation). In other words, theism does allow for natural causes but also is open to a non-natural cause as well. After all, natural laws do nothing and set nothing into motion. A “law of nature” is a description of what happens when no agent (whether it be divine, human, etc) is interfering or intervening into the casual order. Their effects are produced by natural forces whose processes are an observable part of the ongoing operation of the physical universe.

In a Christian worldview, the universe was created from nothing (ex nihilo). One of the classical or traditional arguments for God’s existence is the cosmological argument. While Christian apologist William Lane Craig has revived the horizontal form of the cosmological argument, Thomas Aquinas left the church with an apologetic for the vertical form of the same argument. While the former centers on how the universe began in some time in the past, the latter focuses on how the universe exists at this very moment. In other words, the horizontal form is interested in originating causality or the First Cause of the universe while the vertical form defends the need for conserving causality or a Sustainer of the universe.

Third, a worldview must be livable: After all, a worldview is not just a philosophical system but something that can be attempted to live out each day. Thus, if some views are not livable, then they are not adequate. However, remember that what works is not always true. Lies work very well for many people, but that does not make a lie true.(7) Truth is determined by what corresponds to reality, not simply results. Therefore, while a pragmatic test is helpful, it cannot be the only test for the truthfulness of a worldview.

Fourth, a good worldview will have adequate explanatory power: When examining how a worldview needs explanatory power, it is important to emphasize that a good worldview needs to avoid both extremes of being neither too simple or too complex. In his book called A Case For Christian Theism, Arlie J. Hoover uses the famous “Occam’s razor test.” William of Occam (1300-1349) supposedly said, “Do not multiply entities without necessity” which basically means to resist the temptation to make our explanations too complex. On the other hand, the worldview should not be so simplistic that it commits the reductive fallacy. In other words, it cannot be too simple. (8) A good worldview will be able to explain a wide variety of things that we observe in the world.

Epistemology and Ontology: Fifth, a good worldview will allow for a wide range of methods in the knowing process. To reduce reality to one area of knowledge (such as the scientific method) is a fatal mistake. Furthermore, it also commits the reductive fallacy. A worldview should recognize that humans come to know and experience reality in a wide variety of ways by not only the scientific/empirical method, but also by memory, the testimony of others, intuition, religious experience, logical reasoning, listening to the authorities of others, etc. A good worldview will emphasize a balance between both the objective and the subjective.

“Ways of knowing the world complementing the capacities of sight and mind should be also be embraced by believers in order to do justice to their complete God-given natures and allow them to comprehend the totality of reality in its rich multiplicity and fullness. Naugle goes onto quote what spiritual writer Palker Palmer calls “wholesight,” which fuses sensation and rationality into union with other, yet often neglected ways of knowing such as imagination, intuition, empathy, emotion, and most certainly faith. In God’s epistemic grace, he has provided a variety of cognitive capacities which are adequate for and to be employed in grasping the diverse modes of created reality, and ancient concept known as adaequatio. All capacities ought to be well employed when it comes to apprehending the truth about God, humankind, and the cosmos, else one suffers from metaphysical indulgence. (9)

As E. P Schumacher explains: “The answer to the question, what are man’s instruments by which he knows the world outside him? is….quite inescapably this: “Everything he has got”- his living body, his mind, his self aware Spirit…It may even be misleading to say that man has many instruments of cognition, since in fact, the whole man is one instrument…..The Great Truth of adaequatio teaches us that restriction in the use of instruments of cognition has the inevitable effect of narrowing and impoverishing reality.” (10)

So you might ask where to I begin to work on my worldview?  I will recommend four resources here: 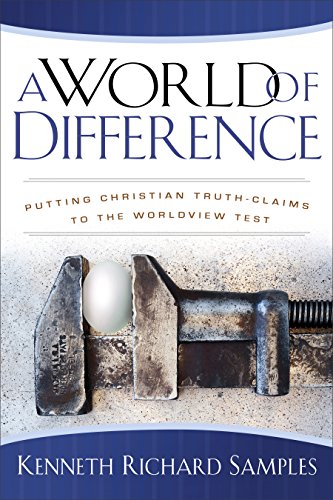 So the question is do you have a private faith, or a public faith? Can your faith answer the big questions of our day?