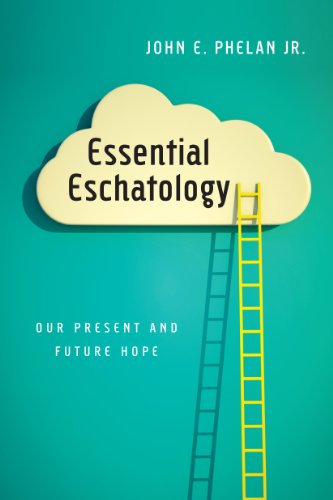 Given that the study of eschatology has fallen on hard times, I am always looking for a healthy book on the topic. This is one of them. John E. Phelan’s Essential Eschatology: Our Present and Future Hope discusses the importance of eschatology to our daily discipleship and the need to stress the “hope” we have in our views of God’s dealings with this world. For example, here is some outstanding advice. He says:

“Then as now, people sought credit and honor. And people have always sought to secure their future by storing up “treasures on earth” (Mt 6:19). Throughout much of human history people have seemed to worry about little more than what they will eat, drink and wear and where they will live. So it is counterintuitive that Jesus would tell us “do not worry about your life, what you will eat or what you will drink, or about your body, what you will wear. Is not life,” he insists, “more than food, and the body more than clothing?” (Mt 6:25). Someone once suggested to me this was either the wisest or the craziest thing Jesus ever said. Jesus’ words here are certainly about trusting God: “If God so clothes the grass of the field . . . will he not much more clothe you—you of little faith?” (Mt 6:30). But there is more than this going on. Our cultures and our economies seduce and compromise us through fear and intimidation. Politicians panic us by warning of the weakness of the economy. We will put up with just about any nonsense from our leaders if the economy is strong. We will meekly do what powerful business and political bosses want if we think we can save our paychecks, our homes, our careers. For the sake of the economy we will “strain at gnats” and “swallow camels.” For contemporary Americans this is the most powerful force of compromise and seduction. I once heard of a pastor in a contentious denomination who said, “When the big split comes, I am going with the pension fund.” Every politician knows that in the United States, Social Security is the third rail of a political career. Step on it, and your services will no longer be required by the electorate! Some Christians seem to have no difficulty in trusting God for their eternal salvation. But Jesus wants us to really trust God and not the economic policies of the Republicans or the Democrats. He wants us to value the kingdom of God over capitalism or socialism. Those who trust God, really trust God, for their daily bread will not be seduced by fear or manipulated by threats. As difficult as it is for those of us who worry about little else, Jesus wants us not to “worry about tomorrow, for tomorrow will bring worries of its own” (Mt 6:34). To have an eschatological consciousness is to trust in God and look to God’s kingdom and not to the kingdoms of this world.”

In each chapter, Phelan discusses topics such as the hope of the church, the hope for resurrection, hope for judgment, hope for the kingdom of God, hope for the millennium, hope for the kingdom, and others. If you are looking for a book where the author tries to take a position such as premillennialism, preterism, or amillennialism, this is not your book. Towards the end, Phelan does favor a postmillennial view, but he doesn’t make that the purpose of the book.He even mentions the Jewish concept of Tikkun olam which means “repair of the world.” It as an aspiration to behave and act constructively and beneficially so that this world might be a better place.  But even in his post millennial views, he does have a chapter called hope for Israel. For example, Phelan says:

“However, does Christian eschatology, the hope of Christians for a new heaven and a new earth, really require supersessionism? Does it not make a place for Israel as Israel? Increasingly, Christian theologians are insisting that it does. Jürgen Moltmann famously argued that what he calls millenarianism does entail a hope for Israel as Israel. The term millenarianism refers to belief in the thousand-year earthly rule of God referred to in Revelation 20:1-6. For Moltmann, millenarianism anticipates a very earthly hope for both the people of Israel and the followers of Messiah Jesus. Millenarianism is the hope of an earthly kingdom—God’s direct rule over a new heaven and a new earth as promised by Israel’s prophets. For most of its history, the church rejected the notion of an earthly kingdom as a Jewish dream. As discussed in an earlier chapter, the prevailing view was amillennialism—the belief that there was no thousand-year rule of God. Rather, God was already ruling with his saints through the church and Christian empire. Moltmann argues that this Christian empire was the chief reason for the historical rejection of millenarianism, the future rule of Messiah on the earth, in spite of the clear expectations of Jesus, Paul and the early church. “We shrug our shoulders over the people of the election, and hence over chiliasm [the belief in the thousand-year earthly kingdom] too,” declared one Christian thinker.9 When the messianic kingdom was identified with the rule of a Christian king or emperor alongside bishops and clergy, the expectation of an earthly kingdom ruled by a Jewish messiah became less attractive—especially for the emperors and bishops. Moltmann, as seen in a previous chapter, intends to reclaim millenarian eschatology for both Israel and the church. He insists that there is a Christian hope for Israel as Israel.

According to Moltmann: The presuppositions for a Christian hope for Israel are these: (a) Israel has an enduring “salvific calling,” parallel to the church of the Gentiles, for God remains true to his election and his promise (Rom. 11:1f). (b) The promises given to Israel are as yet only fulfilled in principle in the coming of the Messiah Jesus, and in him without conditions, and hence universally endorsed (2 Cor. 1:20); and in the outpouring of the Spirit “on all flesh” are as yet… what Paul calls the time of the gospel—in the language of Maimonides, the praeparatio messianica. (c) Christianity is God’s “other community of hope” parallel to Israel and over against Israel. Parallel to the people of God, it is the missionary and messianic church of the nations. It can therefore only remain true to its own hope if it recognizes Israel as the older community of hope alongside itself. In its hope for the nations the church also preserves the “surplus of hope” in Israel’s prophets, and therefore waits for the fulfillment of Israel’s hopes too.

So here, Phelan doesn’t discuss any details about raptures and tribulations, but he does believe Paul and others were justified in seeing a hope for Israel. Yes, it isn’t heresy to believe such a thing!

Phelan also discusses what the Bible does teach about heaven and hell, as well as what Second Temple Jews believed about such issues. He even discusses the growing popularity of universalism.

Given the over reaction to sensationalist and pop prophecy books by John Hagee and The Left Behind Series, I truly believe that we need to be able to incorporate healthy teaching on eschatology into local discipleship. This book would be a great resource to use for such an endeavor. The first followers of Jesus were an eschatological community. We need to understand what they believed and what it means for us today