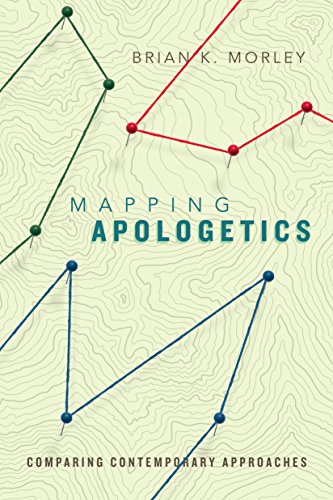 Apologetics is a branch of Christian theology that helps give reasons for the truthfulness of the Christian faith/worldview. The word “Apologia” means “to give reasons, make a legal defense” (Acts 26:2; 2 Tim. 4:16; 1 Pet 3:15). Throughout Acts, Luke uses words such as reason, (trying to) persuade, eyewitness, witness, defense. If you’re an apologetics geek like me, you probably are already interested in the various apologetic methodologies that are out there. Apologetics is giving the ‘what’ and the ‘why’ of why you think the God of the Bible exists and Jesus is his Son. Yes, people have tons of questions and if you can’t articulate why you have decided to commit yourself to the person of Jesus, you will have a hard time being a His disciple in today’s world. Before I had read this book on apologetics methodology, several years ago, I had read the book Five Views of Apologetics. So I was aware of the various apologetic systems. Morley’s book did not disappoint me at all. I love how he laid out all the different apologetic approaches and talked about the apologists who have formed and utilized these apologetic methods in their ministries. I also appreciated how he provided some possible criticisms of each approach.

Since I do apologetics full time on two local campuses, I must pull from several apologetic methodologies. Even though I lean towards the classical and evidential approach, in my experience, it can be necessary to cross over into other apologetic systems.

As Morley notes, apologetic methodology is a complex topic, and brilliant, godly, dedicated people can disagree. Many apologists and the method they use will have different views regarding  the relationship between faith and evidence, the possibility of using induction, the relationship between fact and theory (especially whether we can reason from fact to theory) and the rational capability of the fallen mind.

One thing that I agree on with Morley is the limitations of apologetics. As Morley rightly says:

“We cannot expect to have 100-percent proof, in the normal sense of the term proof, for most of what we believe. As nonomniscient beings, we do not have absolute, airtight proof for real-world things. Proof is multifaceted, and varies according to what is proved.  We prove historical truths differently from those of physics or mathematics. Furthermore, we have different levels of certainty for different things. We have a higher level of certainty for the statement “circles are round” (a tautology) than we do for the statement “Booth shot Lincoln” (what if his legal name at the time was not “Booth” and the records were lost?). But that does not mean that we cannot have certitude, the inner assurance that something is true. We saw that Alvin Plantinga has argued that we can be considered rational for being sure of things we would have difficulty proving (e.g., the world wasn’t created with apparent age a few minutes ago), so our level of certitude can exceed our level of proof. We can inwardly be just as sure of two things for which we have different levels of proof.”

One thing I did appreciate from Morley in this book was his overview of someone that tends to be forgotten: John Warwick Montgomery. As Morley notes:

“Montgomery holds ten advanced degrees, among them the PhD from the University of Chicago and the DThéol from the University of Strasbourg, France—three of his degrees being in law, including the higher doctorate in law from Cardiff University, UK, granted for his publication record. He has written or edited some fifty books in five languages, plus hundreds of articles.He went on to found a law school and a graduate program in apologetics, then to teach law in England (he is a practicing English barrister and an avocet à la cour, barreau de Paris), and to win important international human rights cases. A student in his Renaissance class at Trinity Evangelical Divinity School wrote that he seems to embody the idea of a Renaissance man completed by the Godward focus of the Reformation. Norman Geisler has called him “one of the pioneers of historical apologetics,” adding that his extensive knowledge and work are “virtually unparalleled in this field.” His work had a significant effect on Josh McDowell, whose 23,000 talks have reached over ten million people, and whose 108 authored or coauthored books have sold nearly 50 million copies (including Evidence That Demands a Verdict and More Than a Carpenter).”

I am now going to brush up on my reading of Montgomery’s work.

In the end, for anyone that is in the field of apologetics, Morley’s book is a must read. I appreciated it very much and found it both intellectually satisfying and spiritually uplifting.