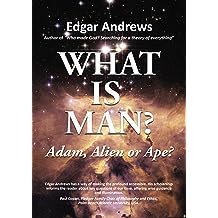 I became familiar with the work of Edgar Andrews when I was introduced to his book Who Made God ?: Searching for a theory of everything.

Given I enjoyed that book, I was eager to read his What is Man? Adam, Alien, or Ape? Andrews has unique writing style in that he is able to take scientific and theological topics and weave in humor as well as personal anecdotes.  He has a wealth of experience and has the credentials that demonstrate he knows what he is talking about. What is Man? Adam, Alien, or Ape? discusses the “big” topics of the day such as contemporary research on the beginning of the universe, the multiverse, the millions of dollars spent on attempting to find if we are alone in the universe, the fine tuning argument, the fossil record, common descent, genetic research, as well as topics that are debated in Christian circles (i.e., The Historical Adam).  It is obvious this book is targeted on the debates surrounding origins. After all, it is from this worldview question that everything flows from. Andrews cites plenty of research which includes both sides of the argument. He is fair in that he presents the issues of the current debate and cites people on both sides of these issues. The reader can purse further research by examining the footnotes with the sources.

For me personally, I walked away from this book asking myself again why so many people assume many of these issues are settled. In other words, is the evidence for a multiverse so incredible that we just know we are one of many universes that got lucky? No, not really. Is the genetic evidence overwhelming for common descent? Not really!  Has Lawrence Krauss showed we can get a universe from nothing? No! The list goes on. Given I do campus apologetics ministry, I would love to see this book go into the hands of college students. Note that Andrews doesn’t get into all the various creation models in this book. This book primarily deals with the science though it does weave together some theology as well. That’s fine with me.

I enjoyed this book and highly recommended it to anyone and everyone!