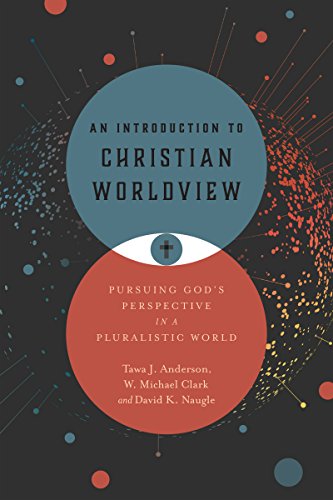 I have read more than enough books on the worldview topic. I looked forward to reading this latest offering to see what it adds to the discussion.  In Chapter 1 the authors do a fine job of defining worldview. They say:

“The English term worldview is derived from the German Weltanschauung, a compound word (Welt = world + Anschauung = view or outlook) first used by Immanuel Kant to describe an individual’s sensory perception of the world. The term spread quickly in German idealist philosophy “to refer to an intellectual conception of the universe from the perspective of a human knower.”1 In the late eighteenth and early nineteenth centuries, German philosophers used Weltanschauung increasingly for the concept of answering pivotal questions regarding life, the universe, and everything. Very quickly, other German thinkers—von Ranke (history), Wagner (music), Feuerbach (theology), and von Humboldt (physics)—applied Weltanschauung to their own disciplines. Furthermore, Weltanschauung was quickly adopted in other European countries, either as a loanword or translated into the local language.”- pg.9

A clear definition is given: “A worldview (or vision of life) is a framework or set of fundamental beliefs through which we view the world and our calling and future in it.”

In my experience, in some cases, Christians are taught that all that matters is a personal relationship with Jesus. Thus, they don’t even view their faith as a worldview. When I came to faith, I know I began to view reality quite differently. As I moved forward and started to do campus apologetics, I began to see there are multiple worldviews in the surrounding culture. Some Christians may not see the value of worldview thinking. In response, our worldview speaks not only to questions about origins, meaning, morality, and destiny, but also to secondary questions about family, career and calling, politics, economics, education, the arts—all of life. Our worldview is all-encompassing, and the different components fit together like the strands of a web. We ask ourselves a lot of questions: What am I supposed to do with my life? What is ‘the good life’ and how can I be happy? Who am I and what is my identity?

As the authors note, in some cases, many textbooks or worldview studies seem to paint a worldview as simply a rational or intellectual system. The authors note that people like James Sire and others have offered a correction. A worldview is seated deep within us; it takes root in our hearts and then flows out of our hearts into what we think, say, and do.

After spending time explaining how a Christian worldview explains these four questions (Ch 5), the authors also ask whether Deism, Naturalism, and Postmodernism can answer these questions as thoroughly as the Biblical worldview does (Ch 7), as well as religious alternatives such as Islam and Hinduism (Ch 8).

Just like other worldview texts, when comparing various worldview, the authors utilize different tests for truth such as the correspondence, pragmatic, and the coherence test for truth. The pragmatic view of truth is very popular. I see it everywhere! In this test, all that matters is the benefit or outcome of a worldview. Thus, it ‘works’ for the person. The authors rightly note that the correspondence theory of truth is the primary test for truth. Truth is what corresponds to its referent. Truth about reality is what corresponds to the way things really are. Thus, if we say God exists and Jesus rose from the dead, that is based in reality.

Also, the authors employ what is called Internal Consistency(Logical Coherence), External Consistency (Evidential Correspondence), Existential Consistency (Pragmatic Satisfaction).For example, if we compare naturalism/materialism, with Christian theism, we can ask is the evidence overwhelming that humans are further evolved animals that came about through the interplay of matter, time, and chance or are we created in the image and likeness of a personal God? Is the physical/material world all there is?  Is humanity a highly complex meat machine, or a person made in the image of God? Is there anything that transcends the physical world? Do the answers to these questions provide existential satisfaction and pragmatic satisfaction?

Another small example can be made in comparing Christianity and Islam. Islam states Jesus was never crucified, and therefore, never risen. The Qur’an was written some six hundred years or more after the life of Jesus which makes it a much later source of information than the New Testament. It seems the evidence tells us that the historical content of the Gospel (Jesus’ death and resurrection) was circulating very early among the early community. The sad thing is that I have had very little success when pointing this out to Muslims. But why? The answer is simple: Most Muslims think that Muhammad’s claim that the angel Gabriel visited him and that it was during these angelic visitations that the angel purportedly revealed to Muhammad the words of Allah. These dictated revelations compose the Qur’an, Islam’s holy book. Therefore, that settles it. If a perfect dictation is all we need, it doesn’t matter if Muhammad never lived in the first century nor for that matter it doesn’t matter that he never had any contact with the apostles/disciples.  It seems historical apologetics and the need for early testimony (as pointed out above) is no match for verbal dictation. Thus, the Qur’an is perfect and who cares if it came on the scene some six hundred years later.

What about worldview conversion? How do people change their worldviews? It is even possible? Yes, it is possible. But as the authors rightly note, confirmation bias plays a role (pgs. 30-32).  Confirmation bias is the tendency to process information by only looking for, or interpreting, information that confirms one’s existing beliefs. An priori belief/commitments means to assume something or presuppose something prior to experience/observation.  This means any attempt to look at or interpret evidence will be seen though their a prior commitments.

For example, a Christian, Mormon, Jewish person, Muslim, and even an atheist will be surrounded by community beliefs.  And when they hear something that challenges their community or longstanding convictions, this creates cognitive dissonance. For example, we may say to ourselves “I thought I knew this was the thing to believe, but now I am hearing counter evidence and I am experiencing dissonance or conflict.” They we seek out answers that confirm what we already believed.  I have seen this happen with people from different faiths as well as atheists. Confirmation bias isn’t going away. It is unavoidable, and everyone is guilty of it. Remember, many people have access to the same evidence. But they don’t agree with the interpretation of the evidence. That’s because they take their presuppositions into the interpretative process. The authors point out some examples of confirmation bias in debates between theists and theists.The late Antony Flew was one that had a worldview conversion towards the end of his life.

Finally, I really appreciated the way authors weaved in pop culture to the worldview narrative. For example, they discuss movies like Star Wars or other movies and ask how well they answer the worldview questions.

Much more could be said. In the end, this is an excellent contribution to the worldview discussion. I am aware that some churches have attempted to utilize worldview curriculum’s. Others haven’t done anything in this area. We can’t afford to engage the culture without worldview training. Also, any attempt to university outreach or apologetics without adequate worldview training is a wasted enterprise. As I said, we need to move beyond over emphasizing our faith as only being about a personal relationship with Jesus. I hope this book contributes to this endeavor.