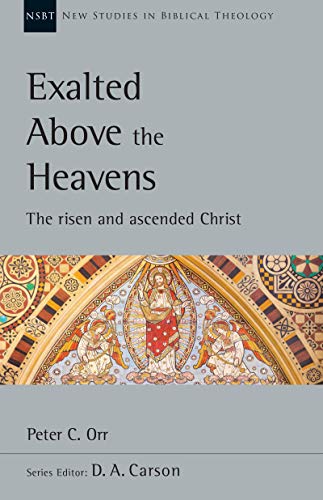 Anyone that has studied Christology knows that there has always been a strong emphasis on the past and future work of Jesus. In other words, there is a tendency to focus on the past work of Jesus (his death, burial, and resurrection) and his future work (eschatology). But what about the present work of Jesus? We say we believe Jesus ascended to be with God. But what is Jesus doing now and how does this impact us?

In this book, Orr discusses the exalted Christ through the lenses of his identity (chapters 2–4), his location (chapters 5–8) and his activity (chapters 9–10). Chapters 3 and 4 discuss the exalted Christ’s relationship to the Spirit and to the church and will consider arguments that have effectively collapsed Christ into either the Spirit or the church. Orr maintains that there is still a distinction between the Spirit and Jesus. This is something I have thought about a lot. I had always though the Spirit is another Jesus. But with that in mind, many have collapsed the Spirt and Jesus into one and that is a mistake. Chapter 5 looks at the relationship between Christ’s exaltation and his absence. Chapters 6 and 7 examine Christ’s absence and his continuing possession of a discrete, individual, localizable human body. For Paul, in particular, Christ’s absence is a bodily absence. In chapter 8 Orr provides an of analysis of the presence of Christ by examining 2 Corinthians 2 – 4. Here we see that Christ’s presence is both mediated and epiphanic; that is, Christ is essentially made present. Chapters 9 and 10 are related to chapter 8 in that it portrays Christ’s active presence; that is, where he is presented as an agent. Chapter 9 concludes with the view just because we believe that Jesus is his sitting at God’s right hand, this does not mean the work of Jesus is complete.  Yes, the work of redemption is complete, but Jesus  continues to work  through his apostles (particularly Paul) continues to cause the progress of the gospel today. Furthermore, it is Christ who ensures that believers will stand and be established in him.  I found Chapter 10 to be quite fascinating because Orr discusses the activity of Jesus in heaven as he responds to prayer and intercedes for believers. Orr thinks that Hebrews 7:25, as in Romans 8:34, demonstrate the  ongoing prayer of Jesus is for believers to persevere in faith. So yes, Jesus is at work today!

One of the most significant conclusions is made by Orr when he says the following:

“We have seen that the risen and exalted Christ remains a human being. His resurrected body is glorified, but it remains a distinct, individual, localizable human body. He did not shed or lay aside his humanity following his resurrection and ascension. Christian theology has, perhaps understandably, been more concerned to stress the deity of Christ. Although the early heresy of Docetism denied the humanity of Jesus and was opposed in the early church, it was generally concerned with Jesus as he lived on earth. Christ’s ongoing humanity has not received much concentrated treatment. However, the ongoing humanity of Christ is important for a number of reasons. First, the ongoing, eternal humanity of Christ underlines the dignity and uniqueness of humanity. Increasingly Western society is becoming intolerant of the idea that humanity is unique. As far back as 1975, the philosopher Peter Singer could speak of ‘speciesism’ to denote a prejudice against non-humans. Singer’s contention is that humanity is not distinct or unique, a position that frequently undergirds, for example, arguments in favour of abortion or euthanasia, which question the inherent value of human life. As such, Christians need a firm grasp of the Bible’s teaching on the uniqueness of humanity. The risen exalted Jesus – truly God and truly human – underlines God’s eternal commitment to humanity. Humanity is valuable – eternally valuable – in the eyes of God and of greater value than any other species. Christians tend to turn to the doctrine of creation to understand the place of humanity, focusing on humans as the image of God. While this is right and helpful, it needs to be complemented with the fact of Jesus’ eternal humanity. That the exalted Christ is a glorified human being shows us what humanity is meant to be and what redeemed humanity one day will be. Human beings are unique in God’s eyes, and we know that because the Son of God became a human being and remains a human being for ever.  Jesus did not dissolve into spiritual nothingness. He retains his humanity and he retains a distinct, individual, physical body.”- pgs 200-201.

So what did I think of this book? I found it refreshing in that it provides insight  to a very neglected part of Christology. I also had always wondered about the present work of Jesus. So many times, we just so “Jesus died for us” and we have no awareness of his present ministry. Yes, maybe we know a little bit about the role of the Holy Spirit. But knowing the relationship between the present work of Jesus and the Spirit is helpful. Also, many of us probably never thought Jesus remains a human being. Yes, we may believe he physically ascended to the Father (at least I hope so). But maybe we assume he is some sort of Spirit without a body. Granted, this may bring up issues about what we will look like in the intermediate state (I know Christians disagree about this), but it is something to ponder. If you are interested in this topic, this is a very helpful read.