DISCLAIMER: From what I gather, atheists and skeptics have told me “Well, I never bring up the arguments to theists that are mentioned in this post. Thus, no atheist or skeptic that I know would bring up these objections.” My response: This is based on my experience from the last 12 years of doing apologetics on a major college campus. So whether you don’t accept it has nothing to do with my own personal testimony from what I have seen.

In 2004, I started going to the Ohio State University and engaging students for the truth claims of Christianity. I did hundreds of surveys with students and certainly begin to see some of the objections people had to the Christian faith. Around 2006 I moved away from the survey approach and started using a variety of approaches to reach out to the students here. Anyway, it was 2009 when myself along with some OSU students planted a Ratio Christi chapter on the campus. This was done out of the necessity for a stronger apologetics presence on the campus. Since we planted the chapter we have had some very well-known speakers come such as William Lane Craig, Frank Turek, Bart Ehrman and Michael Brown, Paul Nelson, Michael Licona and James Warner Wallace. We have also had some student debates with the skeptic group on the campus. Keep in mind that Ohio State is a very large campus (60,000) students. Therefore, I do not mean to stereotype anyone or act like I speak as an authority for the entire campus. There are plenty of other campus ministries and people who might share different experiences that they have seen on the campus.

Sure, skepticism has always been an issue on college campuses. But what kind of skepticism do I see? All kinds of skepticism! But as you will see in the objections below, I also see alot of pragmatism and some post-modernism, mysticism, etc.  I will also provide some resources to the objections I have heard over the last several years.

The more I have talked to hundreds of students about spiritual beliefs, the more I realize there is one objection that comes up more than any other. Now I realize this may not be the same for everyone else. But when the discussion turns to the question “How do we know God exists?”   I used to just jump to an argument for God. I would sit down and try to explain it in detail to the individual. I have now decided to take a different approach and back up: I am convinced more than ever that the first question in the discussion is “How should we approach the existence of God?” or, If God exists, how should God show people he is real? Now when I say “God,” I am referring to the God of the Bible (see more below). Obviously, when it comes to terms like “evidence” and “proof” we always have equivocation issues. But in many cases, this illustration come into the discussion:

The Most Common Objection: “Why Won’t God Show Me A Sign?”

Yes, over the last several years, this is the most common objection that I hear. The skeptic constantly assumes that if they could just see God directly or if God would give them an unmistakable sign that He is there, they would bow their knee and follow Him. Sadly, this is misguided on several levels. The first question as to why won’t God just write it in the sky that He exists or make Himself known in an unmistakable way, leads to the response, “What do you mean by God?” If someone is referring to the God of the Bible, they might want to reconsider the demand for such a thing. Of course, in many cases, skeptics have created a god in their own mind which is idolatry. See Ed Feser’s post called “The One God Further Objection.”  But remember, God declares, “You cannot see my face, for no one may see me and live” (Exodus 33:20). However, there seems to be other texts that indicate people did see God. Even in Exodus 33:11 Moses speaks to God “face to face.” Obviously, “face to face” is a figure of speech which means they were in close communion or conversation. Also, in Genesis 32:30, Jacob saw God appearing as an angel.

But he did not truly see God. In Genesis 18:1, it says the Lord appeared to Abraham. Obviously, there are other cases where God appears in various forms. But this is not the same thing as seeing God directly with all His glory and holiness. It is evident that people can’t see God in all His fullness (Exodus 33:20). If they did, they would be destroyed.  Furthermore, perhaps the demand for such a sign assumes the individual is certain as to how they would respond to such a sign. After all, any assumption that a clear sign will lead to a full surrender of one’s autonomy over to their Creator is quite presumptuous.

One of the most common objections I hear is that there is no way to ‘prove’ or ‘disprove’ God’s existence. Sadly, this can allow a person to punt to some form of lazy agnosticism. Thus, they are off the hook and and can ignore the God question. When this comes up, I now ask  students what they mean by ‘prove’ and then I ask them if they know the difference between deductive, inductive or abductive proof. I hope this chart helps. 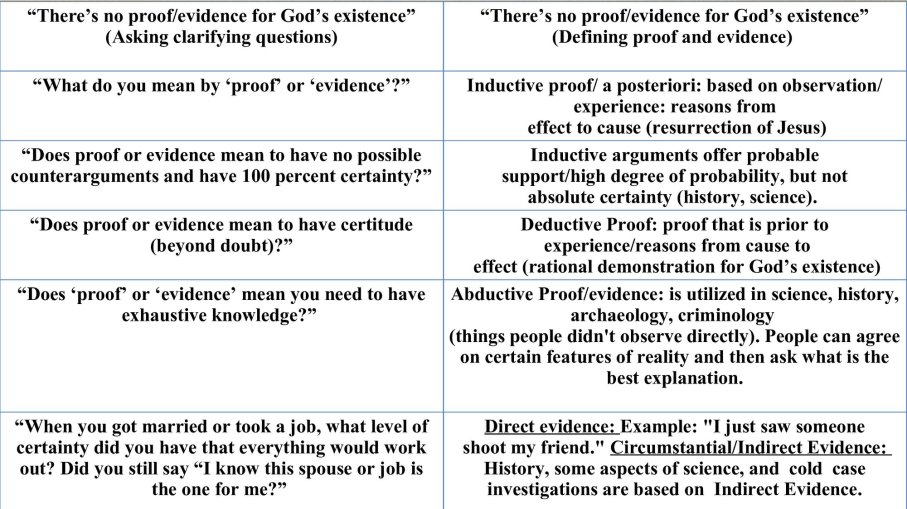 After viewing this clip, here is a summary of what the student says: “I would have to say unambiguous, direct evidence…. Some people will use their explanation for God existing as things we don’t know… [like] the arguments [that] everything is so fine-tuned, but that doesn’t do much for me. I would very much prefer to have actual, direct evidence of somebody saying, “This directly points to God himself coming down and speaking.” And at that point I’d have to verify with someone that I’m not hallucinating…. It has to be some direct evidence of God, not an extrapolation of evidence from something else.”

And here we see the same topic discussed in this clip called ” I Would Believe If God Knocked On My Door” by Brett Kunkle of STR.

Unfortunately, many people (I was one of them) don’t know the difference between direct and circumstantial evidence.  One of the most helpful ways to approach the question of the existence of God is to utilize an approach that is successfully practiced in science, history, law, philosophy, and other areas. It is called “Inference to the Best Explanation.” For example, when we identify a range of data to be explained, formulate a pool of possible explanations, and judge that one is the best among that pool.  When this happens, the data provide evidence that the explanation is true. This is important because when we talk about the God question, so many people (like the student above)  demand what we call “direct evidence.” In other words, they think they should be able to “see” or verify God directly. As I just said, that is a fruitless approach. Of course, Jesus is the full revelation of God. Thus, if you want to know what God is like, look to Him! But, when it comes to history, science, and many criminal investigations, we are dealing with many events that nobody was able to participate in. Thus, these events are in the past and aren’t repeatable. That’s why historians, scientists and criminal investigators, have to collect the information and then make a conclusion based on the combined weight of all the evidence taken together. Note: Please see our short post called a Chart on Approaches to God’s Existence and 30 Suggested Readings on Apologetic Responses to Atheism/Skepticism.

Miracles play a significant role in Christian theology. Obviously, if miracles can’t happen the Christian claim is false (see 1 Cor. 15). What is the definition of a miracle? Theologians and philosophers have offered numerous definitions. But we might say that a miracle is a special act of God in the natural world, something nature would not have done on its own. Let me state from the outset that I am all for a healthy skepticism towards the miraculous. Obviously, we can’t just be gullible and accept every claim that is out there.

When we look into the Bible, there seems to be a pattern of how God works in the history of Israel. Every time he is doing something new in their midst, he confirmed what he was doing through a prophet. Signs are used to provide evidence for people to believe the message of God through a prophet of God. The pattern for miracles is the following:

In the end, (as always), many skeptics demand that God should show them a miracle.  It is interesting that Jesus ran into the same issue. At one point, the Pharisees attributed the miracles of Jesus to Satan. And in some cases the miracle is a witness against those who reject this evidence. John grieved: “Even after Jesus had done all these miraculous signs in their presence, they still would not believe in him” (John 12:37). Jesus himself said of some, “They will not be convinced even if someone rises from the dead” (Luke 16:31). One result, though not the purpose, of miracles is condemnation of the unbeliever (cf. John 12:31, 37).

This is why we need to remember the following.  In their book Handbook of Christian Apologetics, Peter Kreeft and Ronald K. Tacelli say there are three components to faith:

The bottom line is that even if a skeptic got their sign or miracle, it doesn’t mean it will help #3 here. In other words, signs and miracles don’t guarantee it will change a person’s will. We can’t overlook the fact that sin and a hardened heart can dampen a person’s receptivity to the evidence that is already available to them. From my experience, 90% percent of the people that say they want a sign admit afterwards that even if they got it, they might think they are hallucinating.

In the end,  many people simply know very little about the nature of God. Perhaps we need to get back to Theology 101. NOTE: ALSO CHECK OUT PAUL MOSER’S PDF: “WHY ISN’T GOD MORE OBVIOUS?” 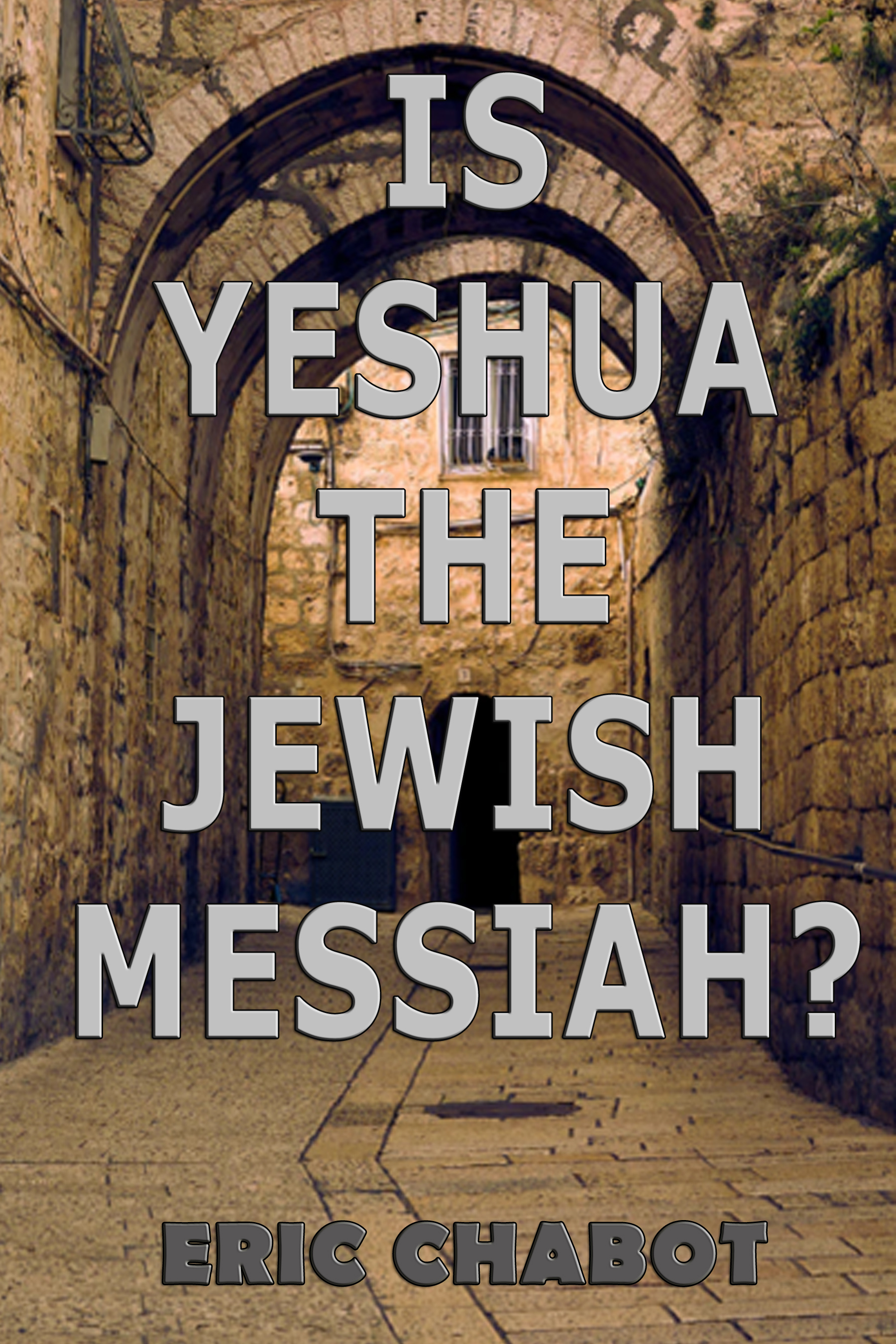