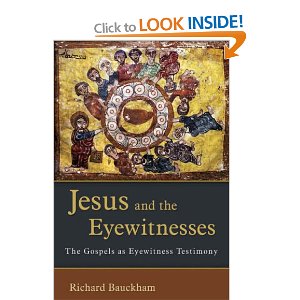 New Testament faith is portrayed biblically as knowledge based upon testimony. In other words, it is impossible to forget that a Christians’ faith will be directly related to the testimony of the witnesses in the New Testament. As a Christian, I share the faith of the early witnesses to the resurrection of Jesus. How do historians reconstruct the events of the past?

Since historians can’t verify the events directly, they rely on things such as written documents (both primary and secondary sources), archaeology, and the testimony of the witnesses to the events. Epistemology is a branch of philosophy that investigates the nature and origin of knowledge. We as humans come to know things by a variety of ways such as reason and logic, intuition, inference, personal and religious experience, the scientific method, listening to authorities on a subject matter, etc. Epistemologically speaking, one of the tools that plays another important element of discovering the past is the testimony of witnesses. As I said, New Testament faith is portrayed biblically as knowledge based upon testimony.

What is significant about Richard Bauckham’s book is his mentioning of Thomas Reid. Reid was a Scottish philosopher and contemporary of David Hume who played an integral role in the Scottish Enlightenment. It was in Reid’s “common sense” philosophy of the eighteenth century where Reid understood testimony as an integral part of the social character of knowledge. In other words, for Reid, to trust the testimony of others is simply fundamental to the kind of creatures we are.

As Bauckham notes:
“Trusting testimony is indefensible to historiography. This trust need not be blind faith. In the “critical realist” historian’s reception and use of testimony there is a dialectic trust and critical assessment. But the assessment is precisely an assessment of the testimony as trustworthy or not. What is not possible is independents verification or falsification of everything the testimony relates such a reliance on testimony would not longer be needed. Testimony shares the frugality of memory, which is the testimony’s sole access to the past, while also, when it predates living memory, existing only as an archived memory, cut off from the dialogical context of contemporary testimony. But for most purposes, testimony is all we have. There are indeed, other traces of the past in the present (such as archaeological finds), which can to a degree corroborate or discredit testimony, but they cannot, in most cases, suffice for the study and writing of history. They cannot replace testimony. In the end, testimony is all we have.”

As Bauckham notes, the Greek word for “eyewitness” (autoptai), does not have forensic meaning, and in that sense the English word “eyewitnesses” with its suggestion of a metaphor from the law courts, is a little misleading. The autoptai are simply firsthand observers of those events. Bauckham has followed the work of Samuel Byrskog in arguing that while the Gospels though in some ways are a very distinctive form of historiography, they share broadly in the attitude to eyewitness testimony that was common among historians in the Greco-Roman period. These historians valued above all reports of firsthand experience of the events they recounted. Best of all was for the historian to have been himself a participant in the events (direct autopsy). Failing that (and no historian was present at all the events he need to recount, not least because some would be simultaneous), they sought informants who could speak from firsthand knowledge and whom they could interview (indirect autopsy). This, at least, was historiographic best practice, represented and theorized by such generally admired historians as Thucydides and Polybius. The preference for direct and indirect testimony is an obviously reasonable rule for acquiring the testimony likely to be reasonable. (Pg 479)

To watch Bauckham in an interview about this issue-click here

Loveday Alexander, in his book The Preface to Luke’s Gospel offers the translations: “those with personal/firsthand experience; those who know the facts at hand (Bauckham, pg 117). One of the greatest assets of Bauckham’s book is the reminder that ancient historians thought that history had to be written during a time when eyewitnesses were still available to be cross-examined.
,