How do we know God exists?  Over the years, when I have been asked this question, I used to just jump to an argument for God. I would sit down and try to explain it in detail to the individual. I have now decided to take a different approach and back up: I ask the person “How should we approach the existence of God?” or, “What method should we use?” Now I know that when  you ask a Christian, Jewish person or Muslim, and Mormon as well how they know what they believe is true, they might just say, “I have faith.” This should cause us to stop and ask if that is an adequate answer. It probably won’t go very far in a skeptical and pluralistic culture.  Some say God’s existence is irrelevant. But remember, the God question impacts:

So in this post I want to discuss some of the various ways we can approach the existence of God. I am well aware that there are other methods as well.

The skeptical issue in our culture mostly enters into the religious dialogue in the following way: “In the case of God, who isn’t some physical object but a divine being, what kind of evidence should we expect to find? There is a tendency to forget that the Bible stresses that sin can dampen the cognitive faculties that God has given us to find Him. Therefore, sin has damaging consequences on the knowing process (Is. 6:9-10; Zech. 7:11-12; Matt. 13:10-13). Thus, people are dead, blinded, and bound to sin.

Christianity stresses that  the God of the Bible is capable of giving a revelation to mankind through a specific medium. One of the most important themes of the Bible is that since God is free and personal, that he acts on behalf of those whom he loves, and that his actions includes already within history, a partial disclosure of his nature, attributes, and intentions.  Think about all the relationships you have with others: one person had to initiate the relationship. They had to speak to you, email you, or do something to reveal themselves to you. Perhaps someone introduced you to that person. Revelation is a disclosure of something that has been hidden– an “uncovering,” or “unveiling.” There are three things are needed for a revelation to take place: God, a medium, and a being able to receive the revelation.

But  why the need for revelation? First,  we need to know the character of God. Hence, we need a clear communication to establish the exact nature of God’s character. Who is God and what is He Like? Also, we need a revelation to understand the origin of evil/the Fall. In other words, we need to be educated concerning the reasons for where we are at as a human race. Furthermore, without a clear revelation, people might think they are the result of a blind, naturalistic process instead of being created in the image of God. And without a clear revelation we would not know our destiny.

Let me expand on the miracles/prophecy issue a little bit: There seems to be a pattern of how God works in the history of Israel. Every time he is doing something new in their midst, he confirmed what he was doing through a prophet. Signs are used to provide evidence for people to believe the message of God through a prophet of God.

When it comes to historical arguments, we ask if God has revealed Himself in the course of human history? If so, when and where has He done this? We can look at religious texts and see if they pass the tests for historicity. Thus, we enter the domain of historical apologetics.

For example, former atheist Anthony Flew said the resurrection of Jesus was the best attested miracle claim that he had seen (see There Is A God? How the World’s Most Notorious Atheist Changed His Mind(New York: Harper Collins, 2007). Another aspect of the historical argument  is the argument from prophecy. Fulfilled prophecy does not prove the existence of God, but it does show that events predicted in his Name that come to pass are evidence of his special activity. When we look at the resurrection of Jesus, we can ask what is the best explanation for:

Also see The Argument from Miracles: A Cumulative Case  for the Resurrection of Jesus of Nazareth.

Also, see our clip called “Answering 15 Objections to the Resurrection of Jesus”

#3: God or Theism as an Explanatory Hypothesis? 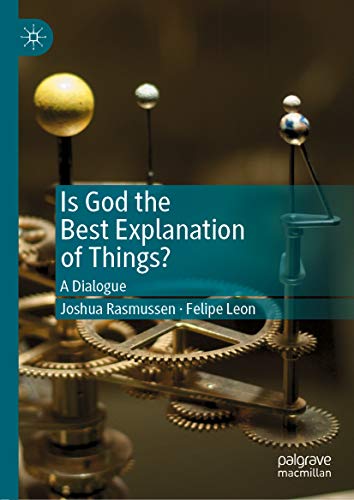 The inference to the best explanation model takes into account the best available explanation in our whole range of experience and reflection. For example, when we look at these features of reality, which provides a more satisfactory explanation:

Abduction can operate when people on both sides of an argument agree on what needs to be explained (certain features of reality) but they disagree on why this feature of reality exists.   Why does this feature of reality exist? Is it the result of nature itself or something outside nature? Remember, when we look at the questions above, if you are committed to philosophical naturalism (the idea that nothing exists outside the natural realm of the material universe), you’ll find a way to interpret every piece of data to confirm your naturalistic presuppositions, even if the best inference from evidence points to something else.

You can see this approach in The Return of the God Hypothesis  by Stephen C. Meyer or Paul Copan’s God: The Best Explanation

Recall that ‘proof’ is a loaded term, which turns on our understanding of what constitutes knowledge. There are knowledge claims that are rooted in inference, and are therefore on various levels of probability. Some arguments for God’s existence use this approach. A different approach in terms of ‘proof’ in establishing the existence of God is by metaphysical rational demonstration. This is found in the classical writings of Aristotle, Plotinus, Augustine, Maimonides, Avicenna, Aquinas, & Leibniz. Feser writes that philosophical arguments are still the most adequate approach to showing there is a God—the God of classical theism. The God of classical theism is immutable, immaterial, eternal, uncaused, omnipotent, omniscient, perfectly good, and can’t be compared to created gods that are part of the physical world such as Thor, Zeus, and others. Two recent books that have taken this approach are the following books by former atheist Edward Feser.  Please note that if you want to find out about these thinkers by reading Richard Dawkins, you are already off to the wrong start. You can also see his interview with Ben Shapiro here:

Many people might ask why I would bring this one up. The reason I mention it is because about 70% of people I talk to about Christianity object to it by saying ” I don’t understand what difference Christianity would make in my life?” This is a very popular approach. In this argument, many people say their religious beliefs have been tried and tested out in the reality of life. Thus, they think their beliefs correspond to reality because they do make a difference. In other words, “Christianity works because it is true!”

This does have some merit. After all, if the Christian faith is the one true path, it should make a radical difference in the reality of life. The challenge of this argument is that in some cases, it seems Christianity doesn’t work. Christians have challenges in their families, work related issues and relationships. However, just because Christians don’t always reflect the character of Jesus and don’t always show the difference it makes, this doesn’t mean Christianity is false. Furthermore, the Gospel is not “What Can Jesus Do For Me?” but instead a call to die to ourselves and follow the Lord (Luke 9:23).

It could be that the person is not under healthy teaching/discipleship or living in sin.  So the pragmatic argument can be a tricky one. Everyone knows Christians have done some amazing things for the world (see here), but we also have some inconsistencies.

The latest book by Clifford Williams Called Existential Reasons For Belief in God is another approach to why people believe in God.

According to Williams, for some people logic and reason are dominant and in others emotion and satisfaction of needs are dominant.

1.Knowing our faith is true though personal experience:  Disciples of Jesus are blessed to receive the assurance of the truthfulness of our faith through the work of the Holy Spirit (Rom 8: 16-17; 2 Cor. 2:2). However, people of other faiths claim to have personal revelations/experiences. Thus, people have contradictory religious experiences that seem quite real. For example, Mormons claim that the Holy Spirit confirms their faith as true by a “burning in the bosom”—this is something they consider to be a confirmatory personal experience.

Showing our faith is true through reasons and evidence: While religious experience is important, all experience must be grounded by truth and knowledge. Knowledge can be the key thing as to what keeps us close to God over the long haul. Plus, Jesus says we should love him with all our being (i.e., mind, emotions and will). Sometimes people think that personal religious experience negates the need for having other good reasons for faith.

There are several other approaches to the existence of God.  Given humans are emotional, intellectual, and volitional creatures, there is no “one size fits all approach.” I hope that has caused you to go further in the question of God’s existence.